Published in the August WCGMC newsletter

Olivine is one the most common rock-forming silicate minerals on our glorious planet.  It is found in iron and magnesium rich igneous rocks, both extrusive rocks like basalt (think Hawaii) and intrusive equivalents like gabbro and deep mantle rocks called peridotite..  When it is found transparent and unfractured, olivine can be faceted into a brilliant green gemstone.  We call that gemstone peridot and it is the August birthstone.

Olivine Group minerals are nesosilicates, meaning that their mineral lattice consists of isolated silica tetrahedral that are connected by interstitial cations (most commonly iron and magnesium).  This leads to the formula (Mg, Fe)2SiO4.  End member Mg-bearing olivine is the mineral forsterite, while Fe-dominated olivine is the mineral fayalite.  The term chrysolite is sometimes used to label intermediate composition olivine.  Most olivine contains both magnesium and iron, but Mg-rich forsterite is more common than fayalite.

Pure forsterite is colorless and extremely rare.  A small amount of iron will impart a yellow green color.  Increasing iron content deepens the green and the value of peridot in gem quality specimens.  Fayalite is generally yellow-brown to brown in color. 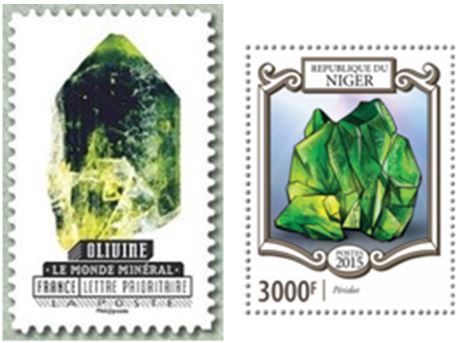 France and Niger have featured olivine and peridot on recent stamps. The French issue is part of a ten stamp mineral set issued earlier in 2016.

Olivine has a hardness of 6.5-7.0.  It is not quite as hard as quartz, but it is harder than the various feldspar minerals.  This means it is not a great gemstone for rings or bracelets, but it is hard enough for earrings and pendants.

With an orthorhombic mineral structure (3 parallel, but unequal crystal axes), peridot gemstones are often faceted into cushion or baguette forms to take advantage of the crystal structure. 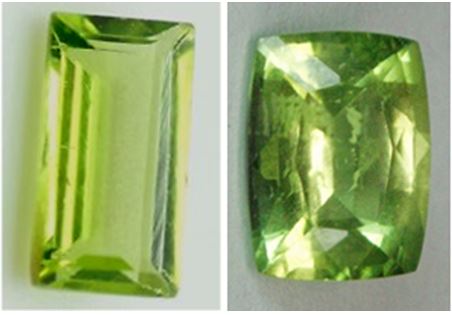 Peridot gem cuts: The baguette cut stone on the left is from Burma. The cushion cut stone (right) is from Pakistan.

The next time you visit Hawaii make sure to collect some olivine!  Olivine is one of the first silicate minerals to crystallize in a iron-magnesium rich (or mafic) magma.  Mg-rich olivine will form at temperatures of 1600-1900° C. The magma from the Hawaiian volcanoes originates from a mantle hot spot deep beneath the island.  The olivine crystals are actually floating in the magma when it approaches the surface and are then frozen into the fine-grained basalt groundmass. 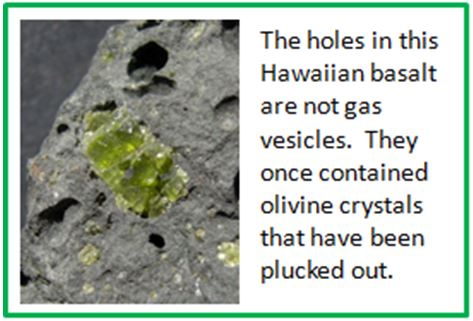 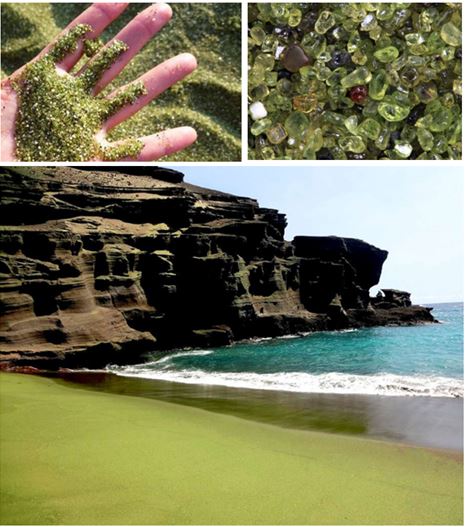 No this picture of the Papakolea Green Sand Beach on the Big Island of Hawaii has not been color enhanced. The beach sand is practically all forsteritic olivine eroded from the islands massive basalts and concentrated by gravity separation. Although very small, some of the grains are gemmy enough to be called peridot.                                 Pictures from Hawaii Tourist sites

The majority of North America’s peridot gemstones come from the basalt flows of Peridot Mesa in the San Carlos Indian Reservation in Arizona.  Although an estimated 85% of the world’s gem peridot comes from Arizona, the absolute highest quality peridot has been found in Burma and more recently in Pakistan.

Historically, peridot is one of the world’s oldest gemstones, perhaps even the first.  Its use as a gem can be traced to the Egyptian Empire as far back as 1500 B.C. and Cleopatra is known to have had a deep love for peridot during the final century B.C.  Interestingly, the mining area for the Egyptian’s peridot (Zabargad Island, formally St. John’s Island in the Red Sea) is now under the Red Sea and inaccessible. 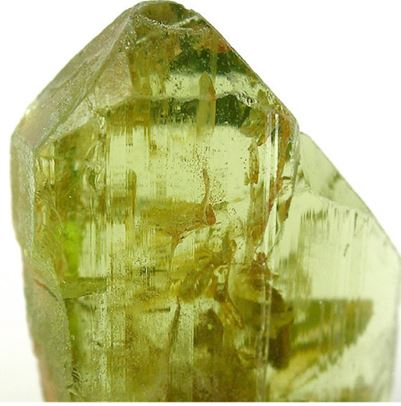 Egyptian peridot: The color, termination style and inclusion style of this 1.5 cm tall peridot identifies it as being from St. John’s Island in the Red Sea. Photo from Wikipedia common

When calcium occupies the interstitial site in the Olivine Group structure the mineral is monticellite.   Monticellite is also found in the Cascade Slide altered marbles (Tracy, 1978).