OK, it was a while ago, about 385 million years to be exact.  And a whole lot has happened since.  The inland sea within the supercontinent called Pangea closed and the Appalachian Mountains rose to heights of nearly 30,000’, comparable to the present-day Himalayas.  Then, about 200 million years ago the Atlantic Ocean began to form and the continents drifted apart towards their current locations.  New York and the rest of North America began its long journey to the northwest.  Erosion over the past 150 million years cut the mountains to their core.  In much of western New York the Devonian sedimentary rocks deposited in the inland sea were exposed and deeply eroded.  Because they had been tilted ever so gently and now dip south at about 1 degree, horizons of common geologic age are exposed in east-west strips across the region. 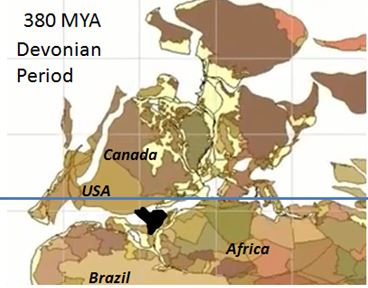 A reconstruction of continents at two different times during the Paleozoic Era of earth’s history reveals that New York State resided near the equator when the bedrock of much of present-day Livingston County was deposited (above) before drifting north as the continents of North America, South America and Africa collided into the supercontinent of Pangea around 280 MYA (below) (modified from Scienze della Terra Educational Science website, 2003). 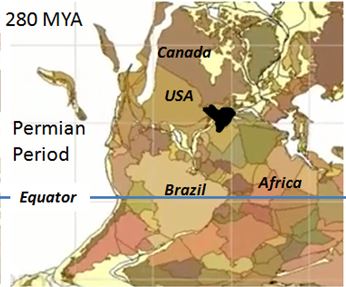 However, it is not that simple.  As we know, much more recently the region was invaded by continental glaciation.  Ice sheets over a mile thick covered Wayne County and the rest of New York State.  The glaciers advanced and retreated several times over the last 60,000 years, retreating for the final time about 12,000 years ago as giant mastodons roamed the region.  The glaciers carved out the Finger Lakes and left vast deposits of sand, gravel, and rock behind as they melted.  Moraines, drumlins and many other landforms covered the older rock almost completely.  Now these glacial features are themselves being eroded, in places down to the bedrock below.  Some of the best places to observe the older underlying rock are in valleys and streams that drain into the lakes.  The more resistant units form the waterfalls we love to visit.  These units are generally limestone and some can be mapped from Buffalo to Skaneateles.  The less resistant shale units beneath them contain the fossils that help us understand the environment that existed much earlier.

Paleontologists are geologists who study fossils in an effort to understand earth’s geologic history and the evolution of the species that have lived in the past.  Although the full section of sedimentary rock exposed in western New York is studied it is the Middle Devonian section (385 million years) that attracts the most attention from paleontologists as well as amateur fossil collectors.  There are three main reasons for this.  First, the conditions at the time, with a warm quiet inland sea, supported an abundant and diverse assemblage of life.  Second, periodic flooding or sediment influx events occurred that permitted rapid burial of and therefore fossil preservation in fossil-rich beds.   Finally, one of the planet’s five major extinction events occurred at the event of the Middle Devonian Period, or about 375 million years ago.  Over a period of some 10-20 million years, over 70% of the planet’s species expired with marine species being most affected.  The cause of this extinction remains poorly understood and paleontologists continue to study the western New York exposures in the hopes of learning more about what happened to cause the loss of many brachiopods, most trilobites, and a majority of the reef-building corals of the time.

Paleontologists are not the only ones to enjoy the search for fossils.  Amateur collectors, either on their own or as members of a number of local clubs, venture out regularly to known locations where the preserved remains of Devonian-age invertebrates can be recovered.  Many fossil collectors consider the trilobite to be their favorite as they search the creek beds, road cuts, or shorelines of the Finger Lakes region.  Trilobites are Arthropods, and similar to their cousins of today (some insects and crabs for example), they molt.  Therefore, it is common to find partial exoskeletons, but rarer to find full specimens preserved.  A full find is a cherished piece. 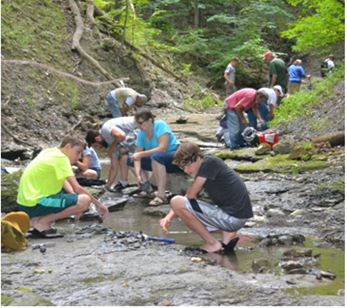 Above: Wayne County club members collecting Middle Devonian fossils in a creek bed last August.
Below: Some of the finds from this and other local trips include A) Pleurodictyum americanum coral, B) Dipleura dekayi trilobite, C) Tropidoleptus carinatus brachiopods, and D. partial Eldredgeops rana trilobite. Many of the collecting locations in Livingston and surrounding counties are on private land. Permission should always be sought prior to collecting. 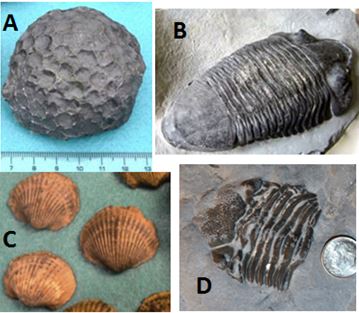 My favorite fossil is a particular colonial coral species, known as Pleurodictyum americanum.  They are not as common as other corals, but I believe it is their near perfect symmetry that attracts me as well as the fact that they grew on hard substrate (like another fossil) such that their base carries interest as well.  And, of course, there are the ubiquitous and varied brachiopods that are found at nearly every site where fossils can be collected.  There are dozens of easily identifiable species waiting to be collected.