It happened in a flash.  At our April Friday club meeting, trip leader Bill Chapman announced that we had been granted permission to enter Seneca Stone Quarry on the upcoming Monday and wondered who might be free and interested.   Seneca Falls is quite close and apparently we either have a lot of idle folk in the club or a lot of anxious collectors ready to get busy.  Eleven folks indicated interest and in a slight mist all eleven converged on the quarry site just south of Seneca Falls ready to collect on Monday morning April 11th.

After an initial disappointment that quarry operations precluded collecting fish fossils and various invertebrates in the Union Springs Fm. atop the quarry walls (we can return for those at a later date), we all located our large sledges and mauls and went to work extracting brachiopods and large Favosites coral colonies from the Oriskany sandstone at the base of the quarry.  At the Seneca Stone Quarry, the Oriskany is a 12-15’ thick silica-cemented, pure quartz sandstone directly beneath the Onondaga limestone units being actively quarried for aggregate.  Locally, this sandstone is peppered with large brachiopods of several different species.  The tendency for the brachs to be localized in particular horizons suggests some transport, perhaps during the same shallow marine action that concentrated the sand.  The larger brachiopods (see photos below) were identified with the help of Karl Wilson’s excellent “Field Guide to the Devonian Fossils of New York” (2014).

Three of the more dominant brachiopod species found in the Oriskany are depicted and named in the header photograph with the story as well as a gastropod that seemed to hang around with them.  Well at least in did in death!  The floor of that part of the quarry was a literal burial ground ! 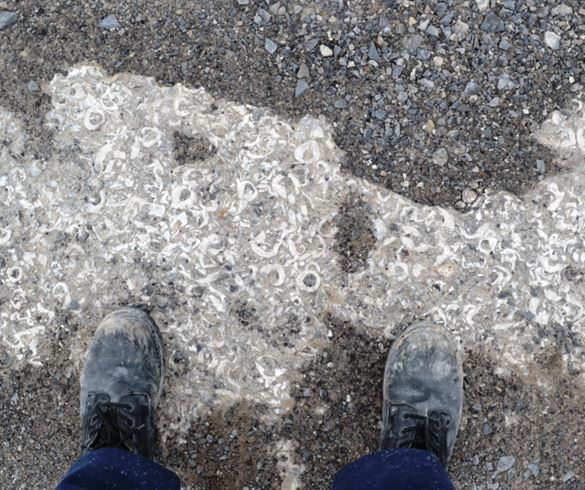 As an aside it is interesting to note that the Oriskany thickens to the south and where it is buried sufficiently it has been a prolific natural gas reservoir.  In fact, as much as 50% of all gas production in Pennsylvania in 1950’s was extracted from the Oriskany.  More recently, the unit is being evaluated for CO2 sequestration (capturing releases from gas-fired power plants and injecting into nearby suitable subsurface reservoirs).