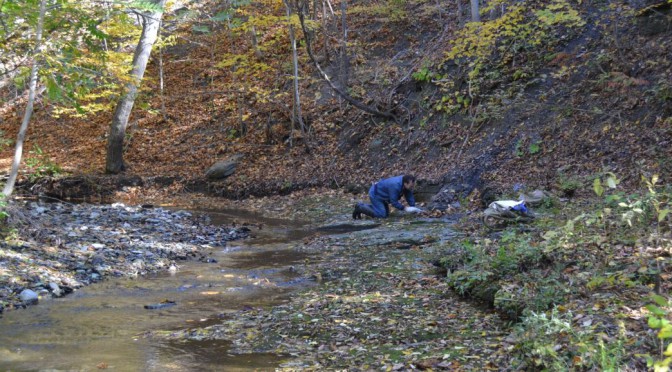 Upon entering Indian creek off of East Lake Road just north of the hamlet of Willard, one immediately encounters a unit with large irregular concretions exposed in the bedrock.  To an untrained eye some might even be confused with dinosaur bones.  One land owner that Stephen Mayer and I visited during an October excursion was absolutely convinced of this and had even built a nice wooden stand to hold his prize “bone”.

Given that the Menteth limestone is exposed at the lakefront in this region, one would suspect that these concretions and the entire stratigraphic section in Indian Creek would expose the overlying Kashong and Windom Shale members of the Moscow Formation. However, it is not that simple.  There is apparently some faulting in the area which may lead to repeat section in the creek bed.  Jacobi (2002) mapped major cross-faults in the creek and Luther’s 1907 Seneca Lake bedrock geology map shows older rock than Menteth extending up Indian Creek.

Even armed with all this wonderful input, Stephen and I could not convince ourselves that we were not in a straight forward Kashong shale section as we waded upstream.  Perhaps it was all the fallen leaves that covered the pertinent geology, but more than likely our failure was that we had our eyes glued to the shales looking for fossils.  While we did not get leave with a comfortable understanding of the stratigraphy we did leave with some fossils. 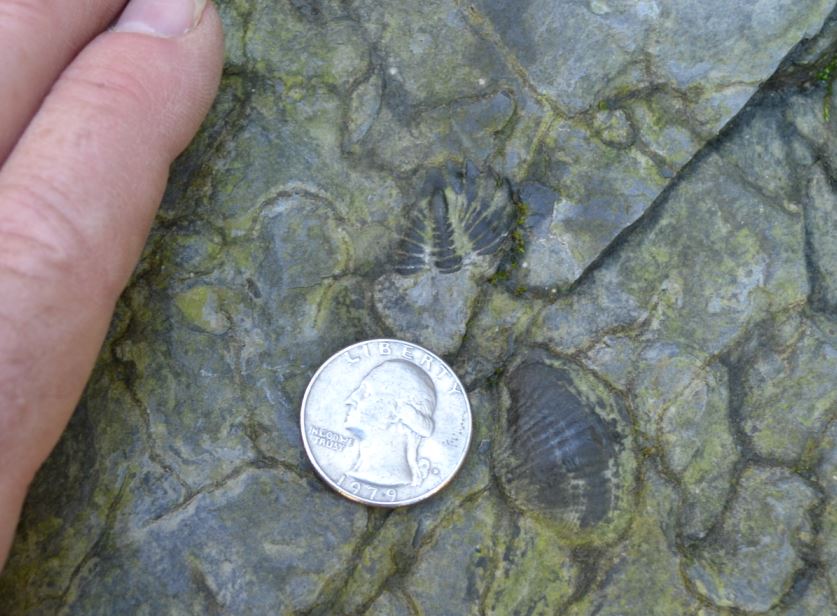 Traversing the Kashong shale, we found a few trilobite pieces, here a pygidium, and lots of Tropidoleptus brachiopods like the one hiding behind George Washington’s head.

About 1500’ from Lake Road and at a major fork in the creek we encountered our first bona fide fossil bed.  Multiple species of brachiopods including Spinocyrtia granulosa, Mucrospirifer mucronatus, Rhipidomella sp., and the ubiquitous Tropidoleptus carinatus were waiting to be collected, but my day was made finding three perfectly symmetric and complete Pleurodictyum americanum.  You may recall from an earlier note that “pleuros” are my favorite fossil and this was a new locality for me to boot. 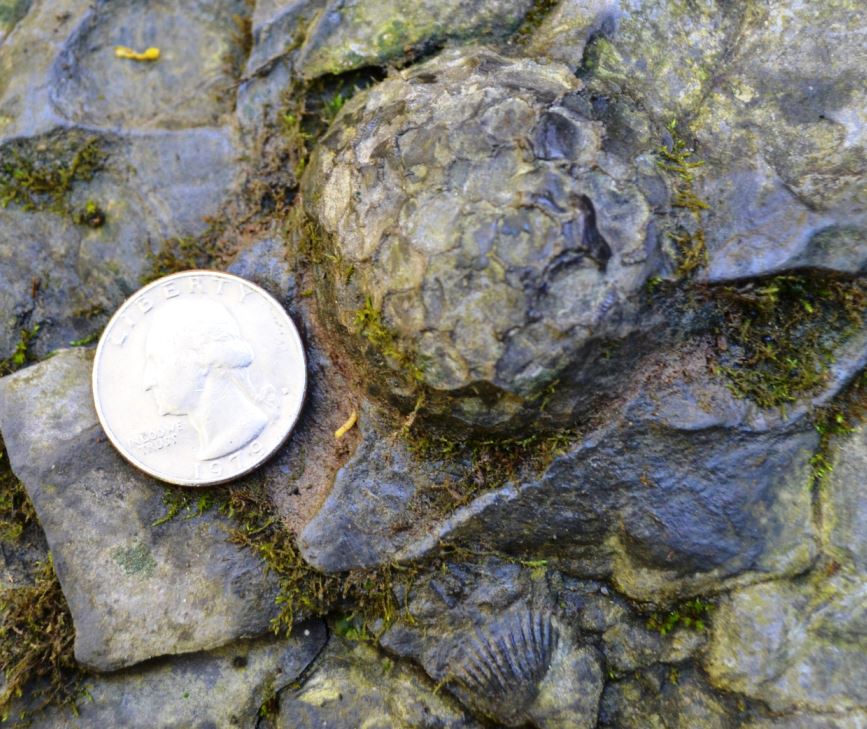 A Pleurodictyum americanum as encountered in the creek bed. Note the Tropidoleptus in the lower middle. They were truly everywhere.

Pleurodictyum americanum are tabulate corals noted for their polygonal corallites. The three I found in the Kashong shale of Indian Creek are also symmetric in overall shape.

Another interesting aspect of Pleurodictyum coral is that they appear to require a hard substrate on which to grow.  Some grow on rocks, others on carbonate hardgrounds, but the most common substrate seems to be another fossil (Brett and Cottrell, 1982). 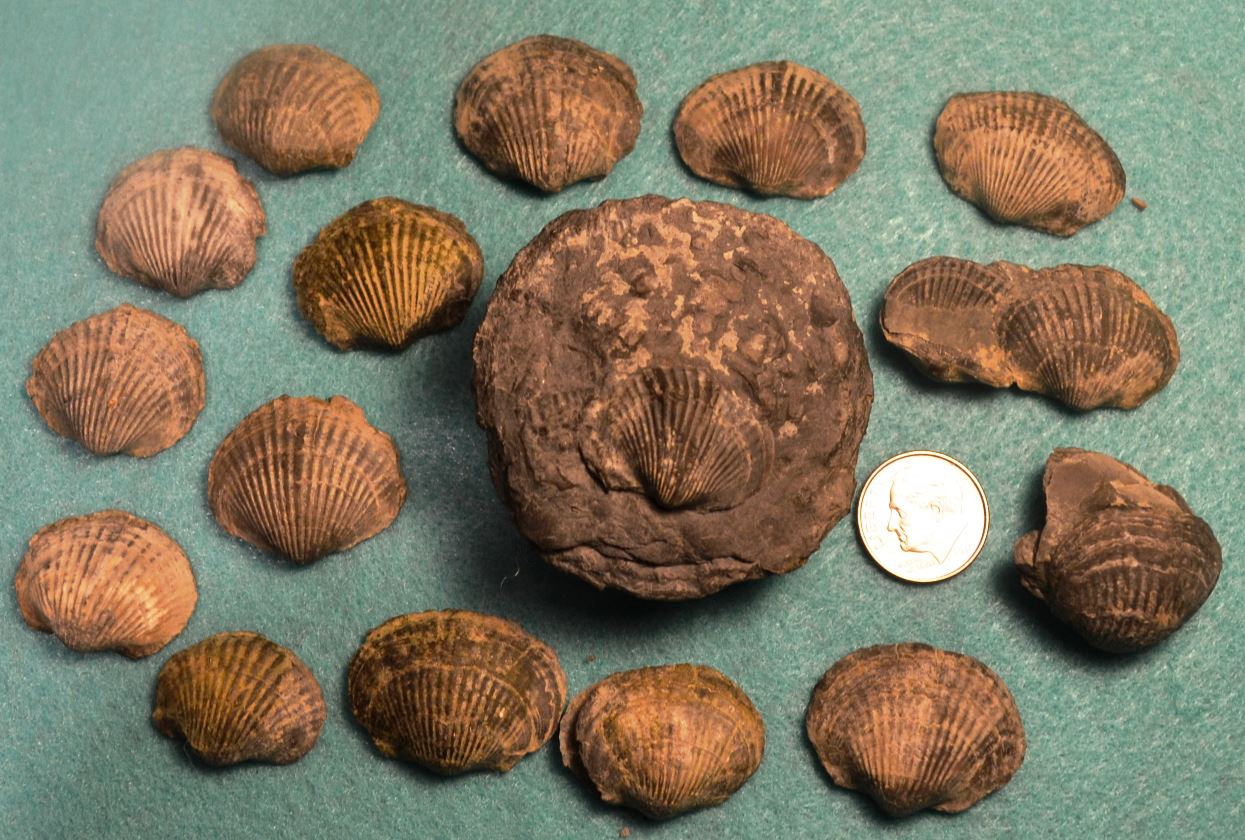 I guess with all the Tropidoleptus brachiopods around, it should not be surprising to see one of the Pleurodictyum I found growing on the common brachiopod of the time. Can you see it on the base of the coral? Meanwhile the Tropidoleptus are literally a time a dozen.

Indian Creek splits into two major creeks about 1500’ from the lake.  We walked each fork a short distance, but had spent our energy for the day collecting fossils near the confluence.  We will need to return next year and walk up each to find ourselves stratigraphically. Perhaps we can find the phosphatic pebble bed at the top of the Kashong member near the base of the Windom.  Morevover, maybe we will traverse the entire Windom and find the Tully limestone that caps the Moscow Formation.  This could establish where we were collecting.  Until then, knowing that we were in the Kashong shale member will have to suffice. 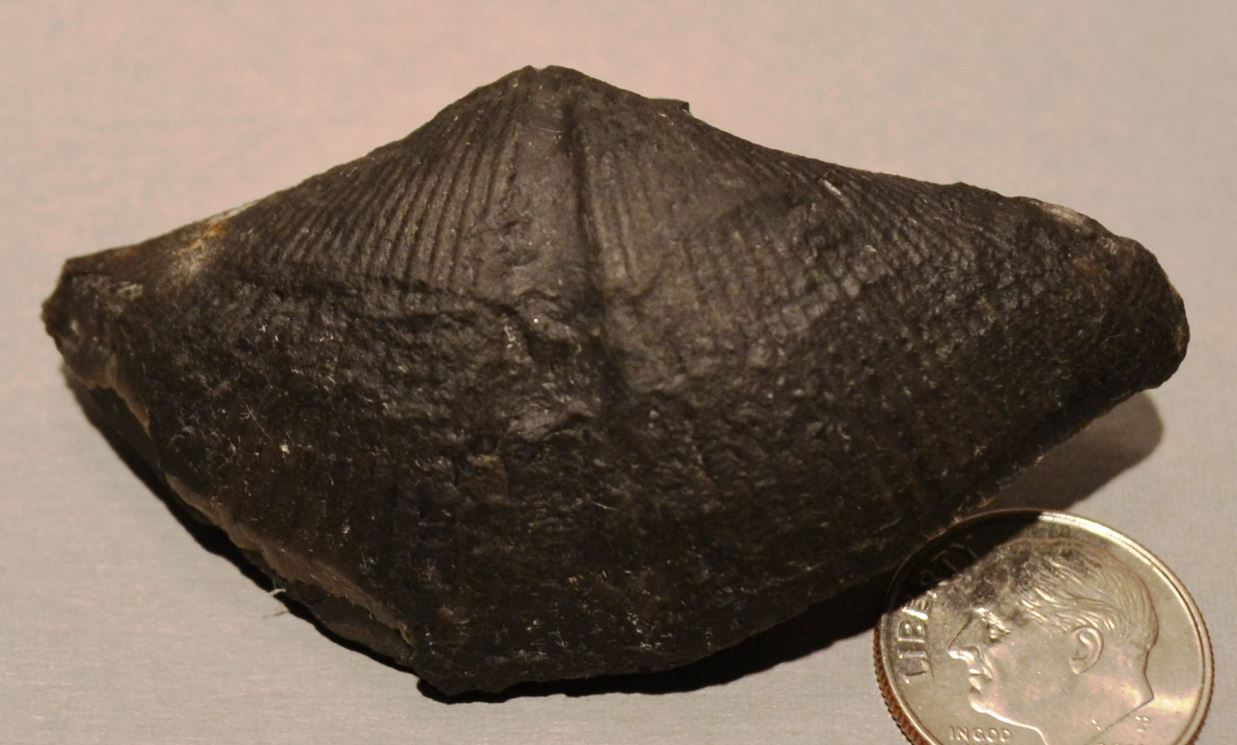 And last but certainly not least, I believe this brachiopod is an Orthospirifer marcyi. Regardless of genus, it is a fine pedicle valve specimen from a new locality.

Indian Creek does not appear to be posted, but as with all creeks and off road regions along the Finger Lakes permission to enter should be sought before entering.