The pieces will probably come with the label “Green River Formation” and it might be from Wyoming, Utah or Colorado.  The location is likely correct, but the fossil identification is not.

Turritella is a genus of salt water snails in the gastropod class of the phylum Mollusca.  They have lived since the Cretaceous Period, thriving during the Upper Paleocene epoch (56-60 million years ago), just a few million years before “turritella agate” from the Green River Formation was deposited.  However, they were not living in the fresh water environment of the Green River Formation. 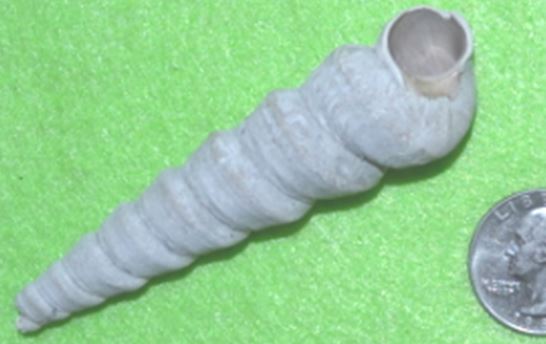 This is a fossil Turritella mortoni from the Paleocene epoch. It was found in the silty shales of the marine Aquia Formation in King George County, Virginia.

Rather, the Green River Formation fresh water snail species is Elimia tenera, and is a member of the Pleuroteridae Family of gastropods.  The best preserved specimens are found in the Laney Member of the Green River Formation in Sweetwater County, Wyoming.   Elimia tenera are prolifically preserved in regions of southern Wyoming, northern Colorado and northeastern Utah where near shore lake beds were silicified during burial.  Intermittent volcanic eruptions likely provided the hot silica-rich ground waters responsible for shallow formation of chalcedony in a subtropical environment where the gastropods thrived.

Turritella on stamps. Another way to collect fossils and shells.

The stamps depicted above both correctly depict recent Turritella species that are clearly of marine origin.  The El Salvador stamp issued in 1980 depicts a Turritella leucostoma, a species found along the Pacific coast from Mexico to Peru.  The 2008 stamp from Bosnia and Herzegovina features a Turritella turris fossil common in the marine Miocene rocks of southeast Europe.

So, next time you visit your favorite rock and fossil shop or show, ask for an agatized Elimia tenera cabechon.  It is very likely no one will know what you are talking about.  But you will!

2 thoughts on “Turritella Agate … or Not”