Late last spring the Rochester Philatelic Association collected birthday information from its members.  No, the data has not been turned over to the NSA, the IRS, or even the APS, and your birthdays have not been, and will not be, posted on Facebook!  Rather, we thought it might be interesting to evaluate the demographics of stamp collectors.  Granted, we are a small club, and a regional one to boot, but there seems no reason to think that our little enclave of philatelic enthusiasts should be radically different from the overall population of collectors, or at least collectors who opt to join clubs.  So what did we learn? 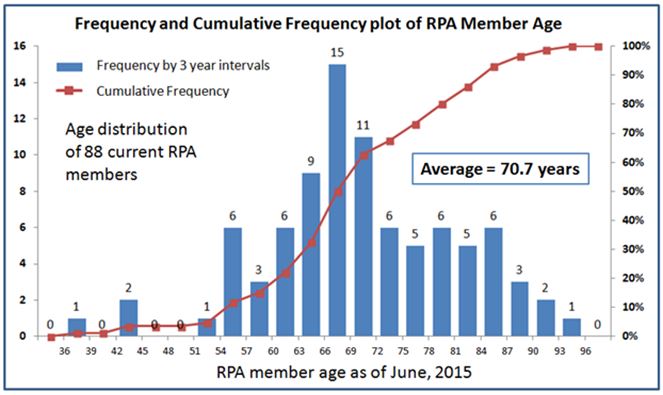 The average age of the 88 members for which we obtained data (which was virtually everyone), was 70.7 years as of June, 2015.  A whopping 28 members, or almost one third of us, are over 75 years of age.  When portrayed in frequency format using 3 year increments, the modal population is 66-69 years old.  Our youngest member is 37 and she (note that pronoun, but that is a different demographic issue) just joined us this year.  We have/had only 3 members less than 51 years of age.  One just moved to South Carolina.  Ouch!

So those are facts, but what might this tell us, if anything?  Well, at first glance one might surmise that we are simply an aging group, destined to a slow but steady decline as the years and decades pass.  But one could argue that it might be more complicated than that.  Perhaps the fact that almost 40% of our members are between the ages of 63-72 just reflects the fact that folks turn to philately at/or near retirement.  Or that stamp collectors who are younger haven’t the time, or motivation, to join clubs such as ours until they retire.  Either way, it might be this demographic group (retirees or those approaching such) that the hobby, and clubs like ours, should target rather than thinking it can make significant inroads on attracting the 30 or 40 somethings who are busy working and raising families.

Of course, these are just my thoughts from an interesting data set.