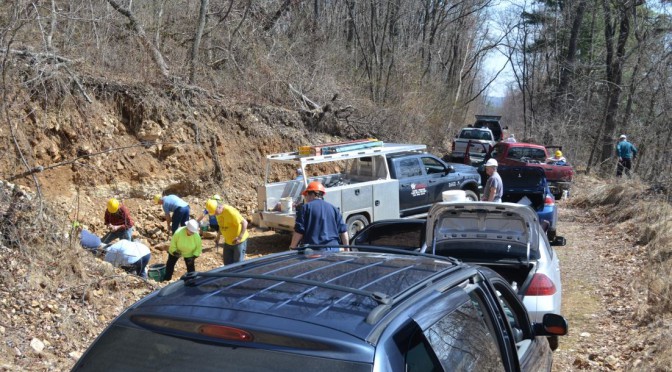 Technically, Mount Pleasant Mills is not in New York, but I am going to claim editor’s license to divert this month’s “Site of the Month” south of the border and to invoke multiple sites.  You see, on April 12th and 13th, thirteen Wayne County Club members gathered up their passports and headed south across the border in search of warmer weather and mineral/fossil treasure.  We found both!

With temperatures well into the 70’s, the group converged on National Limestone Quarry in Mount Pleasant Mills where we were cheerfully greeted by the quarry owner Eric Stahl, who had cleared the road to the ridge atop the quarry in anticipation of our visit.  Up we went, backing in the final section until we were all lined up adjacent to one of the wavellite spots atop the hill and collecting commenced (see cover photo).

It may not appear impressive, but for many years this “roadcut” and a few others like it along the dirt road capping the ridge have been visited by collectors from near and far seeking yellow green wavellite balls.  There is ample wavellite everywhere, but most fractures have insufficient aperture to permit full balls of wavellite to grow and exposed fracture surfaces show radiating sprays or broken crystals.  In addition, every surface is also coated with dust and stained with iron oxide.   Washing is generally required to evaluate the nature and color of the wavellite.  Fortunately, it is a short walk to the cars and material that looks promising can be easily loaded for cleaning once home.

Wavellite is a hydrated aluminum phosphate and it is precipitated from groundwaters as they percolate downward through the fractured Silurian siliceous sandstone.  The source of the phosphate is not completely clear, but virtually all fracture surfaces show some evidence of the mineral and the color seems to deepen a bit with depth.  There is little doubt that the tree and soil covered ridge behind the “miners” in the picture hides many a precious wavellite seam for future generations of collectors. Let us all hope that the site remains accessible to Wayne County Club and other collecting clubs.

Folks may bring better specimens to the May meeting once they have scrubbed them and I may even find better once I completely clean and perhaps split my pieces to expose additional fracture surfaces, but at this point, the small cabinet specimen depicted below is my “best of species.” It certainly illustrates the color and character of the fracture coating phosphate. 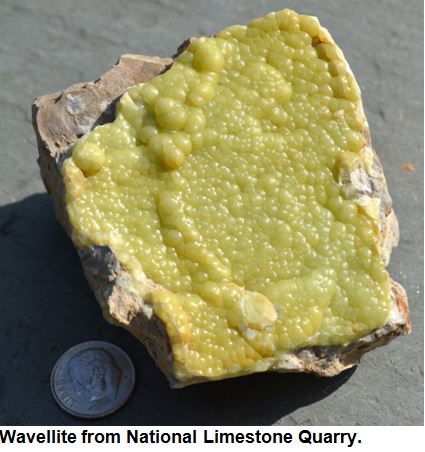 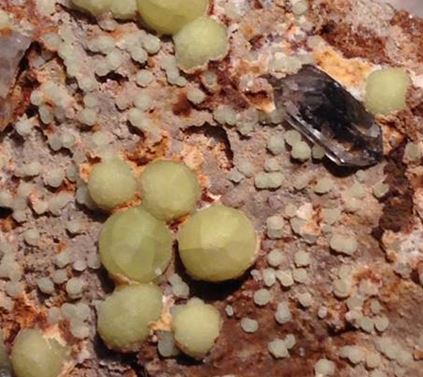 The sandstone is also home to an interesting suite of Silurian fossils.  Several species of brachiopods, occasionally coated by wavellite were found and Scott Jones scored a really nice full gastropod.  Mid-afternoon we descended into the limestone quarry in search of calcite and stronthianite. 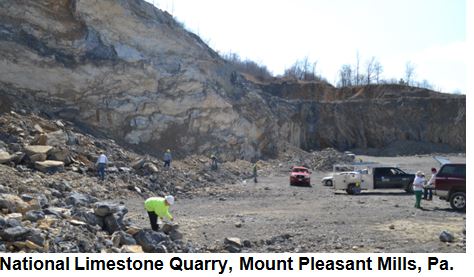 After getting our fill of drusy calcite, but no vug-filling stronthianite, we decided to drive the 12 miles to visit National Limestone’s second quarry in Middleburg. There we found some nice purple fluorite color floating in the white calcite.  No free standing crystals, but the color is intense.  Orange calcite formed as travertine within a cave exposed during the quarrying was the big find in the late afternoon.  A couple large pieces displaying multiple 2-3” diameter stalactite growth rested defiantly along the quarry walls.  Two were reduced to manageable size and winched onto vehicles for transport north of the border.  The team effort is captured below!

Sunday was a day for fern fossils.  For those who have not been to St. Clair, Pa. the Pennsylvanian age Llewellyn Formation there is noted for its fern fossils.  Fern leaf and stalks alike settled into low oxygen muddy lacustrine environments where they were covered by fine black sediment.  During burial they were pyritized, but upon uplift and oxidation the pyrite has been replaced by pyrophyllite, a bright white hydrated aluminum silicate.  The hillside near St. Clair is literally covered with them and digging for more requires a mere rock pick. 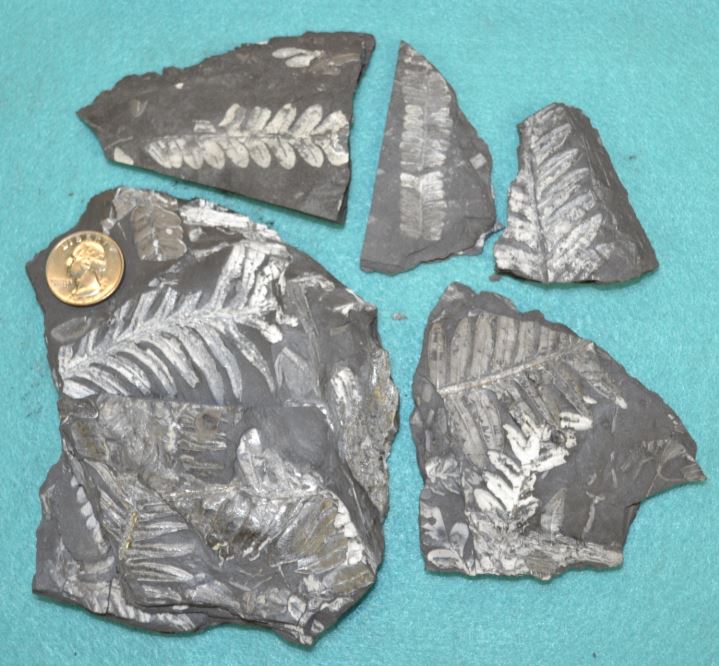 On to Jermyn (north of Scranton) in the late afternoon to collect larger fern and tree fossils of the same geologic age..  The Lycopodiophyta (sometimes called Lycopods) are common in the Pennsylvanian Period and are often found preserved adjacent to coal seams and hence in coal mine dumps such as those in Jermyn.

And when it was all over, everyone filled up with cheap(er) Pennsylvania gas and we passed through customs back into New York.. All were tired and perhaps sore, but very happy with their new possessions.  Ask Linda Schmidtgall to see the largest travertine piece in it’s new home.