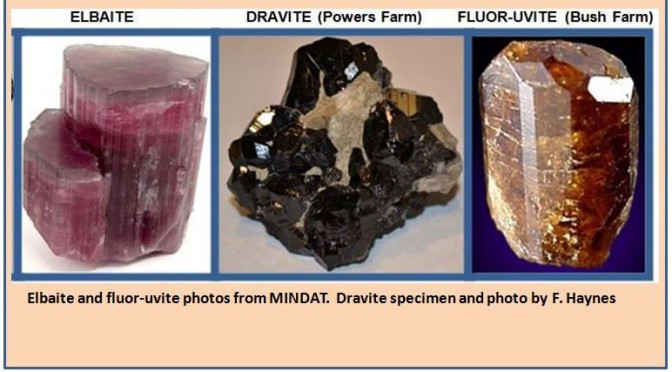 ALL TOURMALINES ARE NOT CREATED EQUAL

When we venture to Ace of Diamonds to dig clear quartz crystals we are seeking a very simple mineral, silicon dioxide (SiO2).  Just simple SiO4 tetrahedrons joined together with each large oxygen atom shared by two small silica atoms in a six-sided prism, ideally terminated by 6-sided pyramids.  And when we seek that elusive fluorite at the annual Walworth Quarry dig, it is just calcium and fluorine combined into a cubic lattice motif with Ca atoms centrally located and F at the corners.  This time each of the 8 fluorine corner cube atoms are shared by four unit cells with the formula CaF2.  In both minerals inclusions generate color variations which get neat names (like amethyst or citrine).  Of course, quartz can twin or show spectre form, but there is no elemental substitutions of note into the lattice of either mineral, and there are no solid solutions to confuse collectors:  just simple SiO2 or CaF2, just quartz and fluorite.

It is not as simple with tourmaline.  When we travel north to St. Lawrence County to collect dravite at Powers Farm, or fluor-uvite at Bush Farm or Selleck Road we are focusing our attention on one of the most complex mineral structures known.  The mineral lattice of tourmaline actually has five structural sites where elements can be swapped and traded, six if you count the rare substitutions of aluminum or boron into the Si site.  These substitutions can be complete or partial, and often occur in zonal patterns such that the center of the crystals actually may qualify as distinct minerals from their outside layers.

19th century English art critic and draftsman John Ruskin whose interests also included architecture and geology once wrote:          “The chemistry of tourmaline is more like that of a medieval doctor’s prescription than the making of a respectable mineral.”  Probably the best way to think about tourmaline is to squint at the chemical formula and think a bit about each of the positions where elements can substitute for one another (but do stop if the head starts hurting).

The above table details the nature of the beast.  Tourmaline is a hexagonal cyclosilicate, hence the Si6O18 core common to all species.  The borate group (BO3) further identifies the mineral group as a boro-silicate.   For those other sites, the various elements listed can vary over some partial percentage range.  Fortunately, or perhaps unfortunately(?), not all permutations or combinations are known in nature.  That said, the International Mineralogical Association (IMA) recognizes 27 mineral members to the tourmaline family and a number of those carry potential modifiers.  Some like schorl, elbaite, or our north country favorites, fluor-uvite and dravite are relatively common.  Others have only been identified at a few sites.  Almost all require elemental analysis to be unequivocally identified.

The grandfather of the family, schorl, is an alkali tourmaline due to the occupation of the X spot by sodium (Na).  End member schorl then contains iron and aluminum in the Y and Z positions, and hydroxide (OH) in both the V and W spots at the backend of the formula.  The Powers Farm dravite involves a solid solution with Mg partially substituting for Fe in the Y position in the lattice.  Once Mg exceeds Fe in that position the mineral is properly called dravite and not schorl.  Now back to that X spot, where a solid solution series between sodium rich dravite and calcium rich uvite occurs when Mg holds down the Y spot.   Analysis of the dark Selleck Road tourmalines in West Pierrepont shows them to be close to the midpoint with near equal amounts of sodium and calcium, but as calcium does exceed sodium, and with F in the W spot, the mineral is properly called fluor-uvite (Chamberlain and Robinson, 2013).

Confused, well now consider that it is even possible for some of these sites to be partially or completely unoccupied by any element.  For example, rossmanite, a green tourmaline found in the Mt. Mica pegmatite in Maine, has a majority of vacant X sites.  The loss of the single charged Na is made up for in valence by the substitution of extra Al in the Y site.  Take out the Na from the X site, and substitute Al for Li in the Y site and elbaite becomes rossmanite.  Like many other of the tourmaline variations, this is a full solid solution substitution and many of the specimens you see labeled as rossmanite barely cross the 50% vacancy rate in that X site to warrant the name change.

Most of the highly sought gem quality tourmalines are found in granite pegmatites.  The high water content of highly fractionated late stage felsic magma tends to promote rapid crystal growth and large crystals as the final magmatic phases “freeze”.  Because boron also tends to be concentrated in late igneous processes, it is not surprising that tourmaline is a common constituent in mineralogically complex pegmatites.

In contrast, the Adirondack dravites and fluor-uvites we fancy are of metamorphic origin.  They formed during high grade regional metamorphism of the geologically complex metasediments that flanked the west side of the Adirondack uplift.