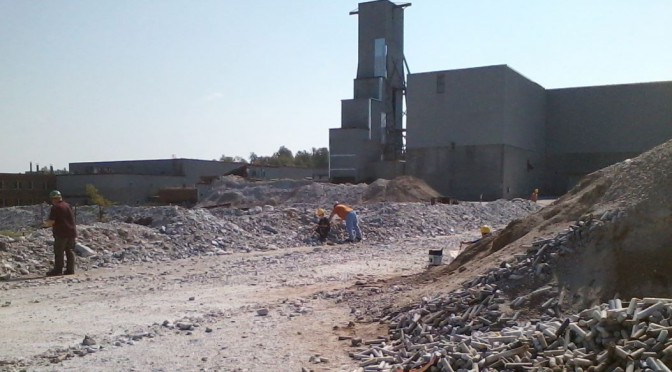 On Tuesday August 20th, nine RAS members met outside St. Lawrence Zinc’s famous #4 mine in Balmat, NY.  The party included Gary Mosbruger (who was helpful in setting up the visit), his sons Alan and Bryan, John Klahn with his sons Anthony and Ryan, Jerry Curcio, Paul Dudley and me.  Once at the mine location, we were met by Bill deLorraine, Senior Geologist for the mine and also the President of the St. Lawrence County Rock and Mineral Club.

Bill led us upstairs for a safety briefing and to view some of the large fine mineral and ore specimens that have been recovered from the lower levels of the mine.  Then he turned us loose on the ore piles and drill core pieces that were conveniently stacked adjacent to the main shaft.  We were able to collect what we could carry.  Much of the ore was massive to near massive red-brown sphalerite, often speckled with small disseminated pyrite cubes.  Elsewhere the sphalerite swirls through the host marble as jelly in a jelly roll.   Unfortunately the nature of the occurrence does not lend itself to crystalline ZnS, but cleavage faces sure reflect sunlight making for pretty rock specimens.  Sphalerite is soft (hardness of 3.5), so cabochons and other polished surfaces do not make good durable jewelry pieces, but they can be most decorative. 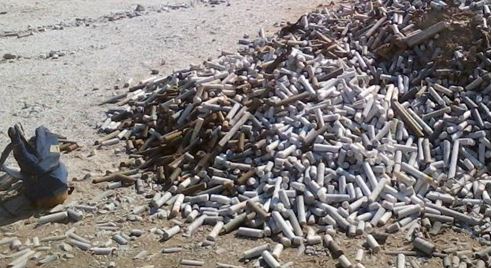 Does anyone want to guess how many pieces of core Paul managed to get into his blue backpack ?

I have not done much with the drill core I packed out, but I did make sure to recover a little of all available rock types.  In addition to the red-brown sphalerite swirling through the white marble, pure white marble, light-green serpentinite (often spotted in marble), and orange calcite were all represented in the core..  In addition some of the metasediments (now schists and gneisses) are pretty in their own right when captured in a 1 3/8th inch diameter core. 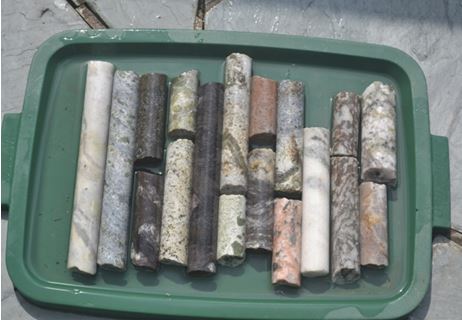 My selection of drill core

We left Balmat a little after noon and headed over to Rose Road off Route 3 in Pitcairn.  Everyone was intent on finding that elusive big sky blue apatite together with the pretty lavender diopside at the northern most digging on the property.  We did find some, but recovery was not easy and most were small. 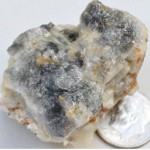 Paul and I puzzled over this bluish mineral intergrown with the diopside, red-brown phlogopite, and calcite.

Paul speculated that this mineral might be scapolite at the outcrop, but we were less certain once back in Rochester as scapolite was not in the previously published mineral list for the property.  I sent a picture to Steve Chamberlain given the locality was included in his recent book.  Steve responded promptly telling us that significant scapolite had been recovered at the site this season and that our samples were definitely scapolite (~ 50% each end member Na-rich marialite and Ca-rich meionite by SEM/EDA).  He sent this picture of one of his specimens. 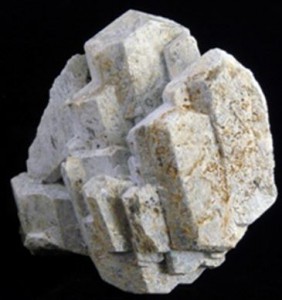 An  SEM/EDA analysis of the lavender diopside indicated elevated Ti, likely substituting into the Mg spot in the lattice and likely affecting the lavender color (S. Chamberlain, pers. comm.).  There is also less Fe in the purple diopside than in the green version just a few hundred feet up the road.

We continued to that second site and collected green diopside with albite and occasional chocolate brown titanite..  I particularly like the samples with bright white crystalline albite intergrown with the diopside.  And naturally, everyone took their fill of blue calcite from the boulders that line the road to the radio tower. 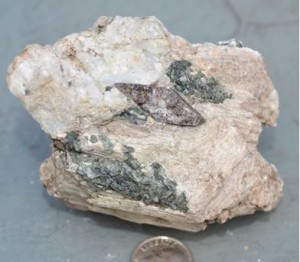 Before leaving, Paul and I explored a bit behind the radio tower atop the marble hill and believe we discovered a previously unknown mineralized outcrop.  Everything was covered by moss and lichen, but I took a couple pieces home and applied bleach.  The result showed orange calcite, green diopside and white albite.  Strongly etched on this surface sample, but perhaps a new site to dig come spring ? 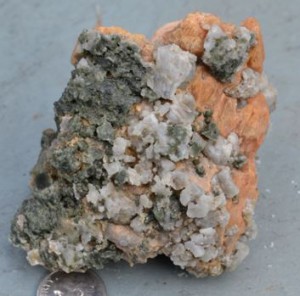 Diopside, orange calcite and and white albite from a new location behind the radio tower.

Before leaving, Paul and I explored a bit behind the radio tower atop the marble hill and believe we discovered a previously unknown mineralized outcrop.  Everything was covered by moss and lichen, but I took a couple pieces home and applied bleach.  The result showed orange calcite, green diopside and white albite.  Strongly etched on this surface sample, but perhaps a new site to dig come spring ?