Unlike many St. Lawrence County locations, the Owen Prospect off Irish Settlement Road in Pierrepont is a newly discovered site.   But like many others, the mineralization here is scattered and geologically diverse.   Exposed outcrops of marble are cut by silicate bearing assemblages.  As the silicates are a bit “softer” it appears that the best collecting process may involve finding some loose weathered out mineralization in the dirt and digging down to bedrock.   The few locations that have yielded nice specimens to date do not appear to have been found from outcrop.

The list of known minerals includes albite (var. peristerite), allanite, scapolite, diopside, titanite, microcline, and phlogopite.   However, most of the usual St. Lawrence County silicate assemblage is likely to be found there with continued digging. 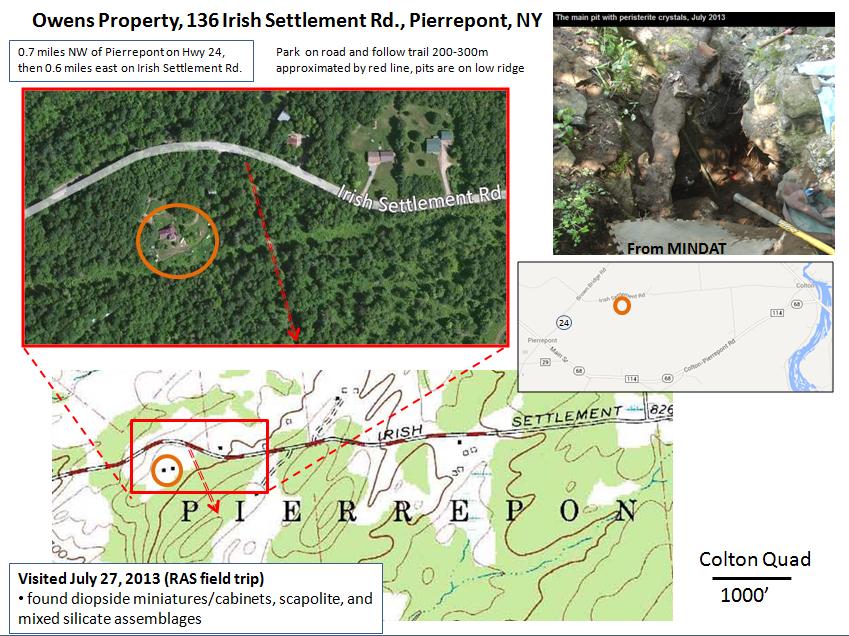 It is privately owned and as recently as the summer of 2013 the owner was receptive to a daily fee to collect.

Aside from minimal location data in MINDAT, the only reference I know to this site is an October 2013 article in Rock and Gem by Mike Walter entitled:  New York Gems and Minerals:  Four Collecting Sites in St. Lawrence County.