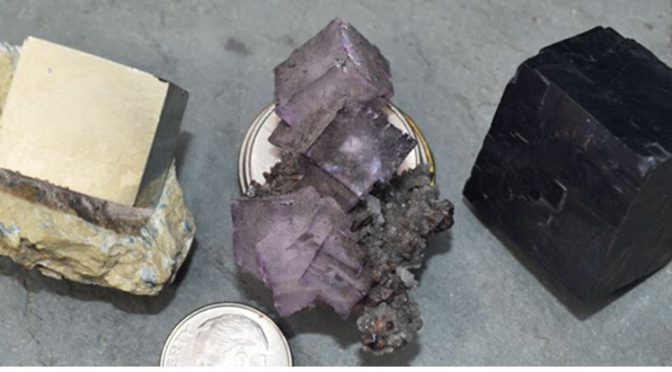 Perhaps you are familiar with mineral dealer David Joyce’s song about “Crystal Systems” and the refrains about the isometric system.  They go something like this: 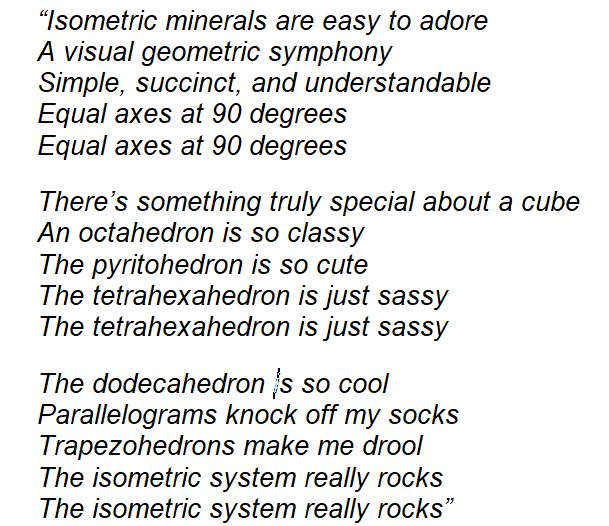 You can hear the remaining verses and lyrics here. . And read a review of his full CD in our July 2017 newsletter.  You will find that David is not as complimentary about the other crystal systems.

BUT, did you know that despite the myriad of modified isometric forms that minerals like pyrite, galena or fluorite can display, there are only six basic isometric crystal forms.   It is the interesting and often complex interplay and superpositioning of these forms that create the aesthetic beauty. 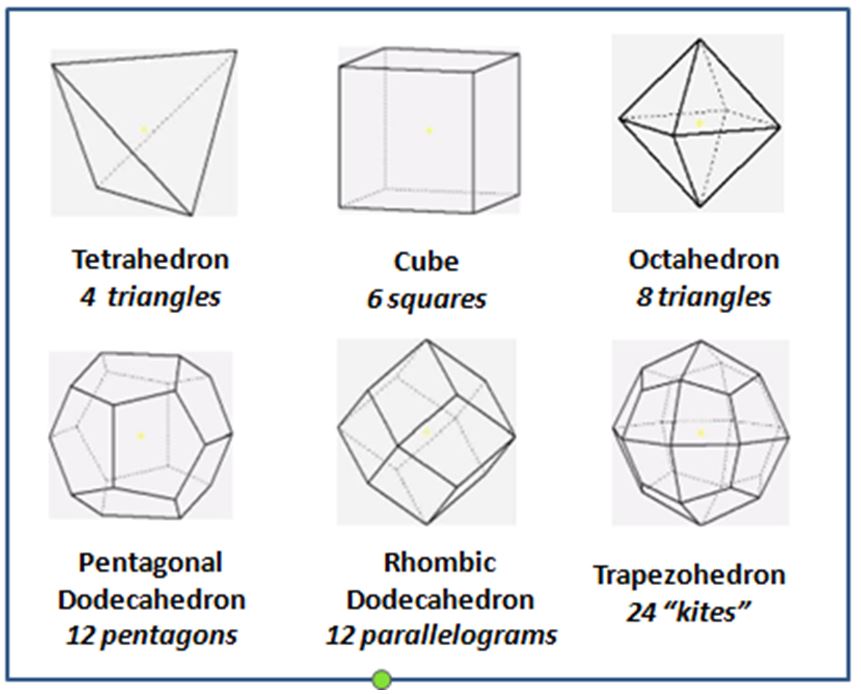 Here are the six simple forms of isometric crystals from the simple 4-sided tetrahedron ( upper left) to the 24-sided trapezohedron (lower right).

It is worth noting that in the mineral world, the pentagonal dodecahedron is also referred to as a pyritohedron given that pyrite often has this isometric form.   And just in case you wondered, a kite is a geometric term:  a quadrilateral whose four sides can be grouped into two pairs of equal length sides that are adjacent to each other.

There is a very succinct and visual webpage on Mindat that depicts literally hundreds of ways these six basic forms overprint each other in the mineral world (Langerwall, 2011).  Can you imagine a crystal combining pyritohedral, rhombic dodecahedral and octahedral faces?  I cannot, but Langerwall presents multiple versions depending on which set dominates.  And for those with additional curiosity, the Crystal Shapes Gallery of Smorf Crystal Models (Holtkamp, 2014) allows you to access these shapes by mineral.  The isometric shapes are linked here.

Any of us could search online for perfect examples of fluorite cubes, garnet dodecahedrons or octahedral magnetite, but I decided to see how many of these forms I could find and then photograph from my collection.  It was surprisingly easy to find them, but less so to photograph them! 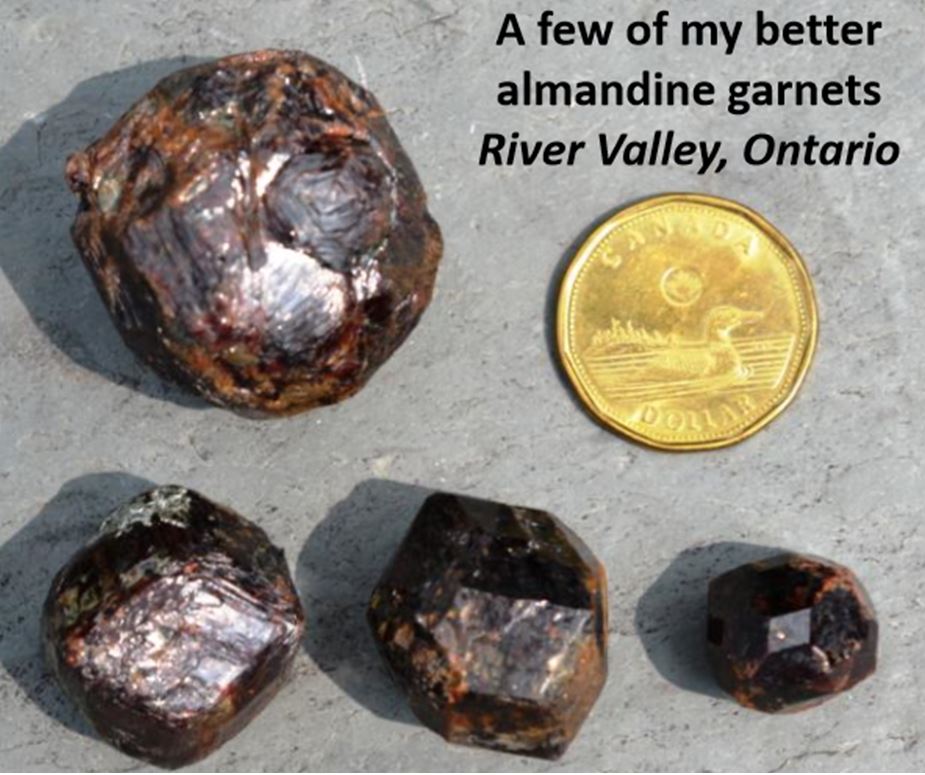 “The dodecahedron is so cool.” We have been to River Valley, Ontario for almandine garnets three times in the past two years. I have many garnets, some as large as tennis balls, from this location, but here are five of the better rhombic dodecahedral garnets I have from that location.

“There is something really special about a cube:” pyrite from Navajun Mine in Spain, fluorite from Elmood, TN, and galena from the Fletcher Mine in Missouri.. The two on the right are self-collected a long time ago. 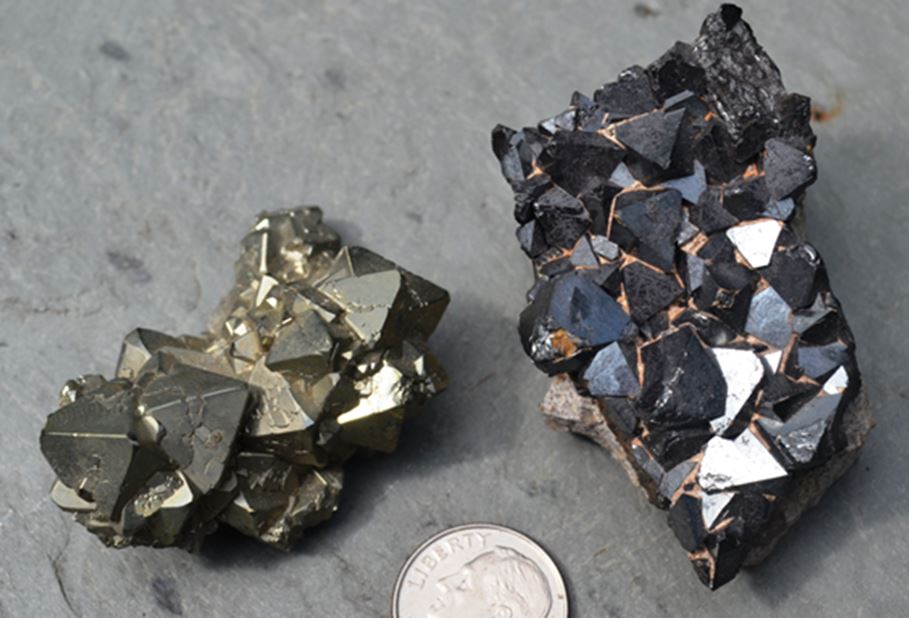 “An octahedron is so classy:” Two South American pieces from my collection depicting octahedral isometric form: pyrite from La Libertad, Peru, and magnetite from Potosi, Bolivia. 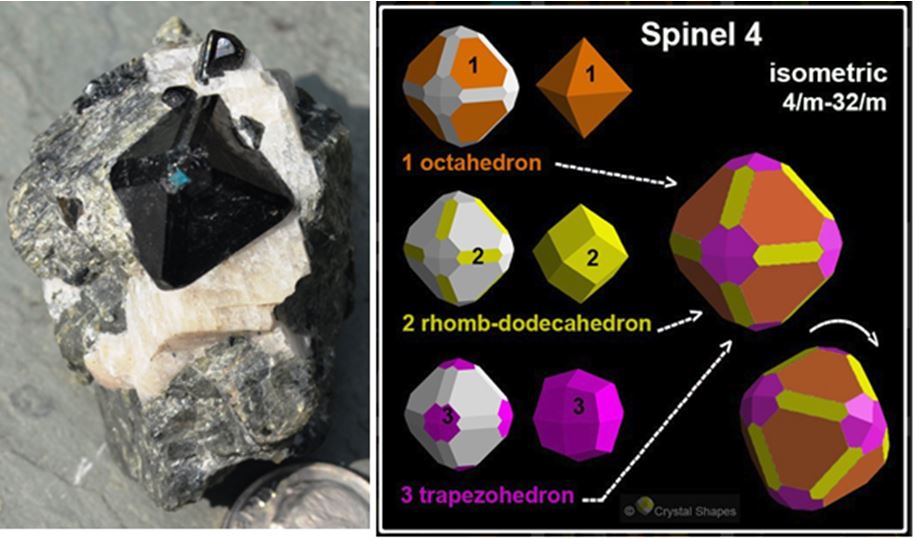 Isometric Spinel: Sometimes the crystal forms are modified and more complicated. I acquired this spinel from the Parker Mine in Quebec at last year’s RMS. It is an octahedron with both dodecahedral and trapezohedral modifications. The depiction on the right is from Holtkamp.