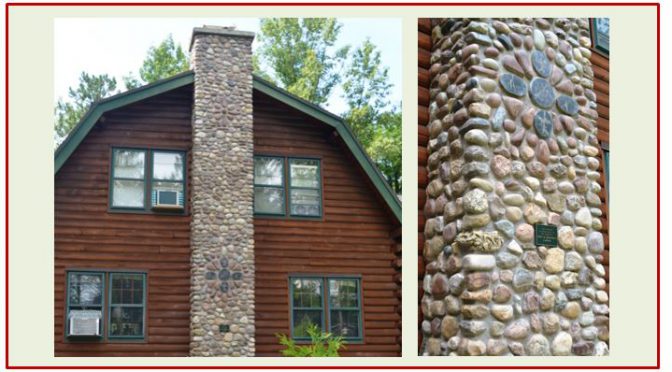 Throughout the story, the axles become stressed and the trailer is weaving on and off the road (sounds like what some of us “rock-hounders” experience on our trips).   It is a hilarious, must see movie and the rock collecting part of it makes me laugh even today considering what I planned on doing 30-some years ago.

There was an idea behind my obsessive rock picking!!   Each time I went on a trip with my vehicle or on a trip with others, my family or friends would say:  “Oh… she’s getting another rock to bring home.”  My idea was that someday all these “rocks” from special places would end up in a big fireplace or chimney in the log home I would build.

The log home was constructed in 1985.  The large cement block chimney was constructed in the front of the house with two flues and a wide base. Tabs were placed between all of the mortar joints to accommodate future stonework.  It was sealed, stained, and left waiting without facing until 2001.

As the years passed, I collected rocks from anywhere and everywhere. Most are from New York State, but locations in other states offered beautiful hedgerow stones and water washed rocks from swift flowing streams or at camping areas.   I have visited all of the Great Lakes and brought back stones from each lakeshore.  All of the Finger Lakes in New York have produced nice specimens. 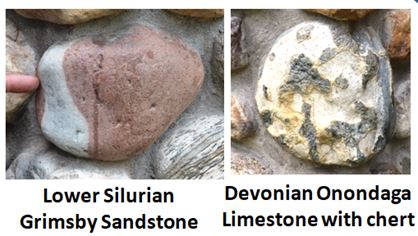 Every location gave up one or two specially patterned, unusual stones characteristic to that area.  The ones from Lake Ontario were exceptional, especially the Medina sandstones near Pultneyville.  The smooth, round black and white cobbles would also add to the varied look of the future chimney. 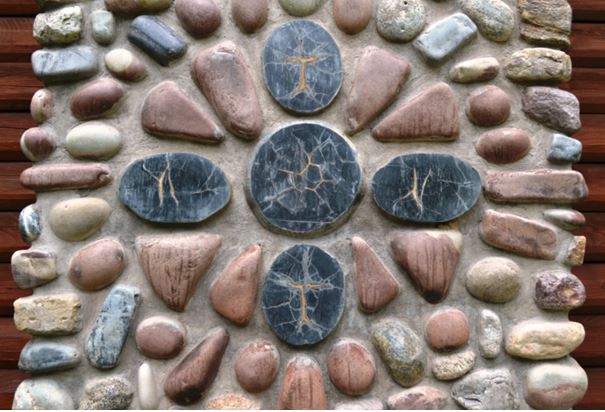 My favorites were the Turtle Stones (septarian nodules) frequently found around Canandaigua Lake or in the ravines around Hemlock Lake. I had these stones cut in half with the idea of placing them in a large “rosette” design on the lower front face of the chimney. 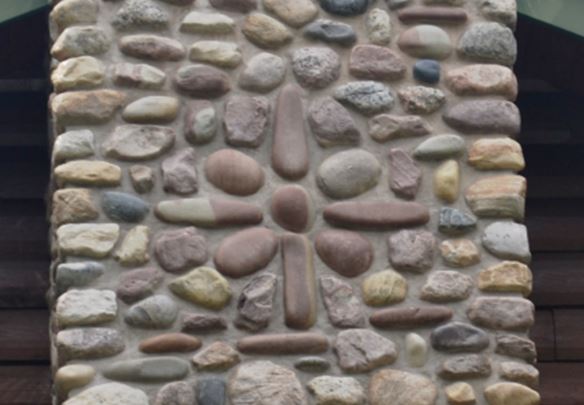 On the upper part of the chimney I designed a special cross symbol that has Native American origins. The stones from Williamson and Pultneyville along Lake Ontario were perfect for this design. The center stone of the rosette-like cross stands for love. The other four “arms” of the cross symbolize Friendship, Consideration, Respect and Trust.

Once my design was completed I started to gather up all of the stones and rocks collected over the years and organize them into piles for the front, sides and the peak. The largest rocks were for the base and were placed in a separate pile.   The year was now 2001.   For several years, I had been looking for an exceptional “old school” Italian stone mason.  I found someone local and the summer-long project began.

As the scaffolds and materials were being delivered, I laid out the entire  pattern of the chimney from bottom to top on part of the driveway and on all of the gravel sidewalks surrounding the chimney. Each layer of the plan started to take shape.  It was slow progress, just two or three feet could be added each day.

I wanted to have the mason keep track of the special patterns of the rosettes. We agreed to mark the patterns with numbers written using chalk on the stones in a clockwise fashion.  When transferred to the face of the chimney, this insured they would be in the correct order. This project went on from mid- June until late September.  The stonemason said that this was a masterpiece and in all his years, one of his most interesting and memorable jobs!! 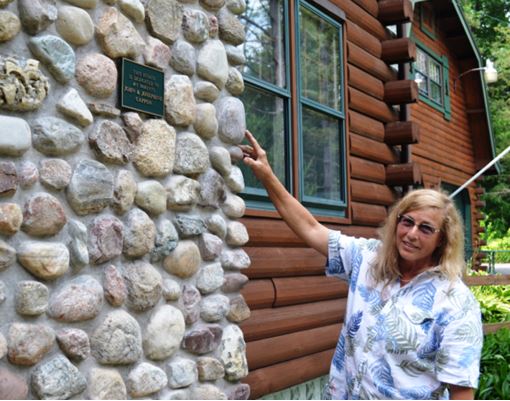 The pictures are worth a thousand words! You see, compulsive rock picking while travelling and hoarding yard rocks can have a positive outcome.  It just might take time for it all to come together.