The Hope Diamond is set into a necklace and surrounded by 16 diamonds which exquisitely show off the diamond’s size and blue color (page 1 photo).  The blue color is caused by a very small amount of boron (3-5 ppm) distributed in the crystal lattice.  Yellow diamonds owe their color to equally small amounts of nitrogen.  The 45.52 carat Hope diamond, now valued at 200-250 million dollars, has resided at the Smithsonian since its donation 55 years ago. 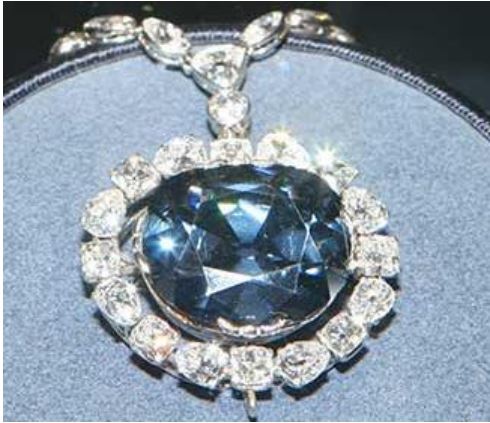 The history behind this diamond is also fascinating, complete with interesting characters, unlucky owners, and enough criminal activity that many believe the stone carries a curse.  Named for a London banking family that owned the jewel in the 19th century, the diamond was originally recovered from alluvial gravel sands along the Krishna River in southeast India in the early 17th century.  Numerous kimberlite pipes that had intruded the Dharwar region of central India about 1.1 billion years ago have sourced alluvial diamonds in several downstream rivers since the 14th century.  [Sorry, your editor is a geologist!]

Did you know that the United Nations had declared 2014 as the “International Year of Crystallography”.  It is probably not surprising that when India designed a stamp to commemorate the event, they decided to include a picture of a blue diamond that looks suspiciously similar to the Hope Diamond. 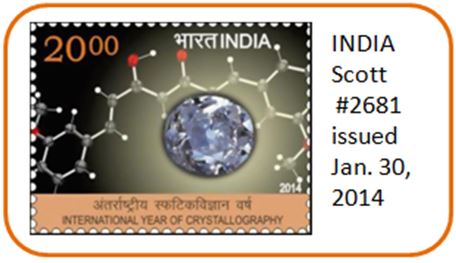