Article I wrote for the Dec. 2014 WCGMC News

The Hope diamond is one of the most recognized and well known jewels in the world.  At 45.52 carats (9.104 grams), the 1” by ¾” pear-shaped blue jewel is currently valued at more than 200 million dollars.  From its undocumented discovery in India in the 17th century (or before), the diamond has seen owners in India, France, and Britain before coming to the United States early in the 20th century.  It has been re-faceted on several occasions to improve quality and luster.  The gem has resided in the Smithsonian Museum of Natural History since 1958, when Harry Winston, a jeweler from New York City, donated the famous gem with the hopes it would stimulate further donations.  It did and the National Gem Gallery at the Smithsonian is a must visit for anyone trekking to Washington D.C. 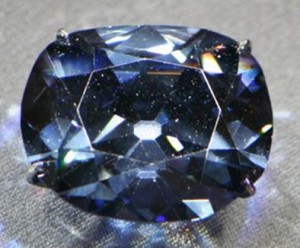 The Hope Diamond was removed from its setting for a short time in 2009.  The blue color is due to a very small amount of boron (3-5 ppm) in the crystal lattice.  Nitrogen  can impart a yellow color to diamonds.

It is believed that the Hope Diamond was recovered from alluvial gravel sands along the Krishna River in Andhra Pradesh Province of southeast India, perhaps in the early 17th century, perhaps earlier.  Exploited from the 14th to the 19th century the placer deposits along the Krishna River once employed as many as 60,000 people.  The source for the diamonds is believed to be one of the hundred or so kimberlite pipes that intruded the Dharwar region of south central India about 1.1 Billion Years ago.  Although diamonds have been recovered from the source kimberlites themselves, by far the largest jewels and the most economic mining ventures have been in the alluvial deposits along the several rivers that drain the region.

The stone is named for a London banking family that owned the jewel in the 19th century.  The history of the Hope diamond is full of famous and interesting characters, and sufficient disease, criminal activity, and death that some believe the stone carries a curse.  Much of that belief may be a result of the diamond’s appearance under ultraviolet light. 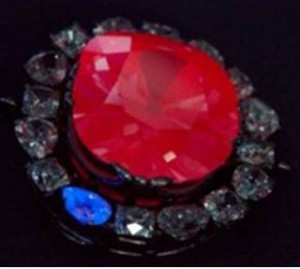 The Hope Diamond shows brilliant red fluorescence under short-wave ultraviolet light.  In fact it is also phosphorescent as the red color remains for many seconds after removed from UV light exposure.   Note the more typical blue fluorescence of one of the 16 pear and cushion cut diamonds that surround the Hope diamond in its current setting.  A blue fluorescence is typical of about 40% of all diamonds and is due to just 3-5 parts per million boron in the carbon-dominated lattice.  The red color and phosphorescent nature of the Hope diamond is due to a unique interaction of two impurities, boron and nitrogen, in the lattice, although it is not completely understood why this diamond fluoresces so differently from any other.

In the pendant surrounding the Hope diamond are 16 white diamonds, both pear-shapes and cushion cuts.  It is interesting that one of these appears deeply blue fluorescent itself.  I can find no mention of this specific diamond in the literature.  Anyone who can tell me more about it gets a prize!