Mineral collectors know about the fine magnetite, sphalerite, hexagonite, chrome tremolite, lazulite, etc. that have come from the various mines in the Balmat-Edwards Zinc District of upstate New York. Mineralogists have studied the district for decades discovering new minerals like turneaureite and donpeacorite.  But seldom are we offered such a wonderful opportunity to learn the geology of the district as afforded those attending the New York State Geological Symposium  in Alexander Bay in October.

The opening address was delivered by William deLorraine, Chief Geologist for St Lawrence Zinc Co. in Gouverneur, NY.   Bill is also the President of the St. Lawrence County Gem and Mineral Club.

His focus at NYSGA was on the geologic evolution of the world-class zinc deposits known as the Balmat-Edwards Zinc District.  Although sphalerite (ZnS) was discovered at Balmat in the 1830s and has been exploited since 1915, the complex geologic history of the ores remains problematic.  Originally deposited in a carbonate-rich sedimentary exhalative environment, the entire region was subjected to Upper Amphibolite grade metamorphism (~650° C  and ~6 Kbars pressure) during Grenville time (ca.1.15-1.2 Billion years).  At that time significant deformation affected all rock units, and sphalerite ore bodies were remobilized. The sphalerite is not thought to have melted, but rather to have taken on a plastic character, migrating along weaknesses at great depth.  Bill refers to the remobilized bodies as daughter ores and has spent his career tracking their convoluted movement during mobilization and looking for the elusive, and perhaps larger, parent ores.  Due to the multiple stages of deformation this is not an easy task.  His talk, including animated graphics demonstrating how the sphalerite is thought to have migrated, was informative and entertaining.  And, yes, he did show some slides of the pretty minerals the district is known for (hexagonite, magnetite, chrome tremolite, and more).

A Bit on the Economics of Zinc

From 1930 to 2001, the Balmat Mine mined 33 million tons of ore with an average grade of 8.7% zinc.  Depressed zinc prices forced closure in 2001, but the mine came back to life in 2006 when zinc prices spiked and remained open until August of 2008.  Although not operating, the mine is maintained in a “ready to operate mode,” pumping it out regularly and maintaining all essential equipment.  Zinc currently sells for about $1.02/pound, up from 80 cents earlier in the year.  Unlike gold, silver, copper, and oil zinc price has not dropped during the 2014 downturn in other commodity prices.  Furthermore, the Balmat-Edwards District is not out of ore.  A quick look at the chart below is illustrates what the mine needs to re-open, stable zinc prices above $1 or perhaps at $1.20/pound. 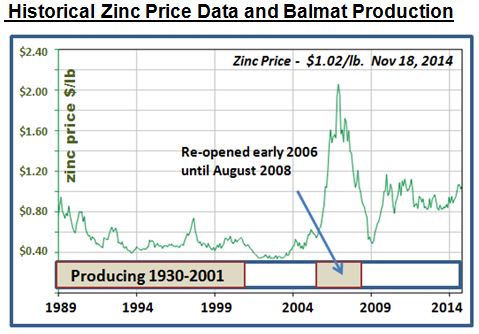