The specimens from this location have been referred to as “aesthetically challenged” (Steve Chamberlain), and I have heard the roadcut hole called a “garbage gully” (Dick Phillips).  Of course that has not precluded Dick from moving massive amounts of the material to his garden in Buffalo.  Personally, I prefer the phrase “mosquito haven”, but regardless of what you call it the locale is a worth a one hour stop on the way into the Adirondacks to locations like Rose Road, Benson Mines, or points beyond.  The site may have particular interest if you are in search of very large, strongly etched, dull crystalline material for your yard.  It may be of less interest if you are looking for quality mineral specimens to show off under the bright lights of your living room mineral showcase.

Just park your car in the open lot on the northwest corner of the intersection of routes 3 and 58, walk to the left end of the tree line, take a deep breath of fresh air, and descend about 20’ down into the gully.  Unless a few thousand mineral collectors with large trucks and a propensity to collect large amounts of truly grungy material have preceded you, you should see plenty of dull green pyroxene and dirty orange potassium feldspar gleaming at you in the gully bottom.  Well, it won’t actually be gleaming, but you should be able to see it without a flashlight, even though the tree cover might turn noon to dusk and if your timing is wrong the mosquitoes may appear to descend in flocks.

BONUS:  Once tired of competing for grungy “crystals” with mosquitoes in the dark gully you may want to walk along the route 58 towards the bridge over the Oswegatchie River.  The rocks in the roadcut on the way to the bridge are varied and interesting.  At one point a felsic appearing gneiss can be collected that contains visible, although small, grains of deep green diopside, purple fluorite, titanite (yes, yet another 2014 siting), and biotite.  I found no grain larger than a centimeter and all are part of the rock and not free standing.   But, it is an interesting rock.  I did find a small black tourmaline in loose rubble along the road, but could not locate the source in the roadcut.  Be careful along the road; the flora includes poison ivy. 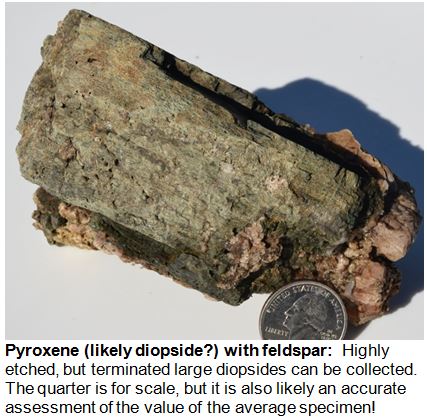 If you have Robert Beard’s 2013 Falcon Guide entitled Rockhounding New York, this second site is #60, called Fine Roadcut, in his book.