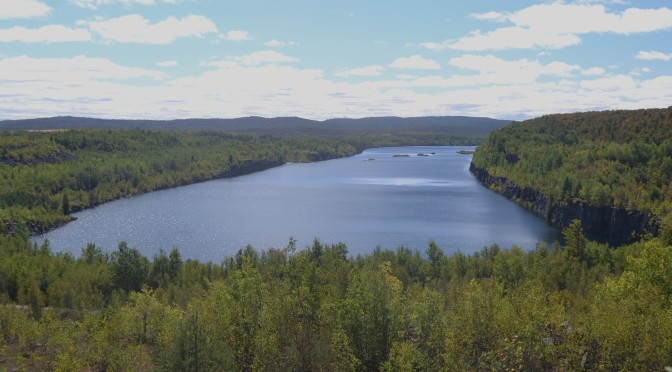 Benson Mines was an open pit iron mine that exploited a magnetite-martite rich unit in the high-grade metamorphic terrain of the Appalachian Lowlands. The pit is not a beautiful tree-lined lake just north of the town of Star Lake on Route 3.

Quality mineral specimens were difficult to obtain but the rocks and the views were awesome.  At one site large pegmatite blocks/boulders had been piled and massive expanses of muscovite mica could be observed intergrown with quartz and feldspar.  The Plattsburgh students delighted in flaking off books of mica the size of their hands, but getting it with matrix proved daunting.  Magnetite and specularitic hematite ore was everywhere, sillimanite gneiss was collectible, and we were led to a site where a large collection of rocks collected by a local collector had been dumped.   There was hematitic stained ore from Sterling Mine in Antwerp there along with rocks and ores from a number of identifiable and unidentifiable locations (at least many were such for me).  I need to train my ocular microscope on the vugs in that Sterling Mine rock, maybe just maybe there will be something interesting in there, like the millerite on the cover of Chamberlain and Robinson’s book!

The Plattsburgh students were led by Dr. Mary Roden-Tice, an igneous petrologist who specializes in the application of fission tracks in apatite (AFT) to date geologic events and unravel geologic processes in the development sedimentary basins, the erosion/unroofing of ancient mountain ranges, and in regions of active mountain building.   In words from her university website “the analysis includes both the determination of an AFT age and modeling of time-temperature histories based on the measured fission track length distributions.  The technique is based on the formation of damage zones resulting from the spontaneous fission of naturally occurring 238U in U-bearing minerals such as apatite.”   For more on the method or her work, I suggest you visit Dr. Roden-Tice’s webpage (http://faculty.plattsburgh.edu/mary.rodentice/)

In addition to Dr. Roden-Tice, the students, and many of us collectors, also benefitted from Dr. Jeffrey Chiarenzelli’s local knowledge.   Dr. Chiarenzeilli is the mineral professor and also Department Chairman for the Geology Department of St. Lawrence University in Canton.  He is known among Adirondack geologists and mineral collectors for his papers on the subject. Some of you may remember an RAS field trip a while back that included a stop at a tourmaline location in High Flats State Forest that Jeffrey is credited with discovering (same general location as the Seven Sisters site).  Both these locations are noted on page 56 of the 2013 publication by Chamberlain and Robinson entitled “The Collector’s Guide to the Minerals of New York State”.   Editor’s comment: If you intend to field collect or if you are just interested in the mineralogy of the state’s foremost locations this book is a must for your personal library

As if the expertise and leadership from two professors with local knowledge was not enough, Dino Zack, from Buffalo, but with summer residence in Massena, happened to have his fluorescent mineral display in his van and he pulled it out for an impromptu presentation for the Plattsburg students and some of the St. Lawrence group.  Being broad daylight, Dino could not show the rocks in their UV splendor, but he did have some pictures to go along with the various sphalerite, fluorite and other exotics he had in his “travelling” collection.