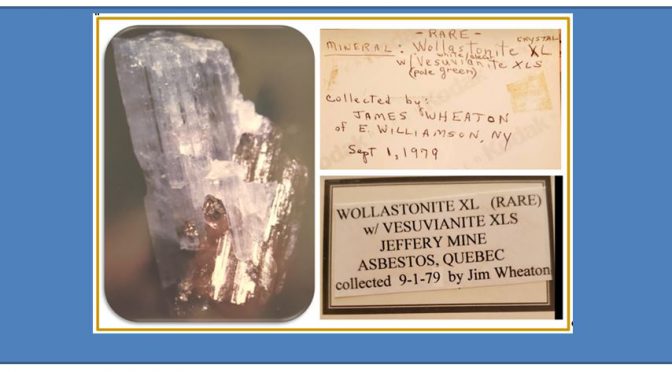 Some of you may know that the Wayne County Gem and Mineral Club was founded in 1974.  You may also know that Jim and Marion Wheaton were the driving force behind its creation and its growth.  Jim passed away in 2011, but his wife Marion continues to read our newsletter and follow the club’s events and adventures.  Their daughter, Diane, also shows Marion Facebook posts that our members post.

Well, Diane saw my Facebook post in mid-June when I sought input for the next month’s newsletter.  Coincidentally, she was also organizing pictures that her 89-year-old mother had accumulated.  She picked out one of Jim Wheaton’s mineral pictures and wondered if we might be interested in seeing a specimen Jim had collected on a WCGMC field trip over 40 years ago.  What a wonderful thought and such a fine gesture.