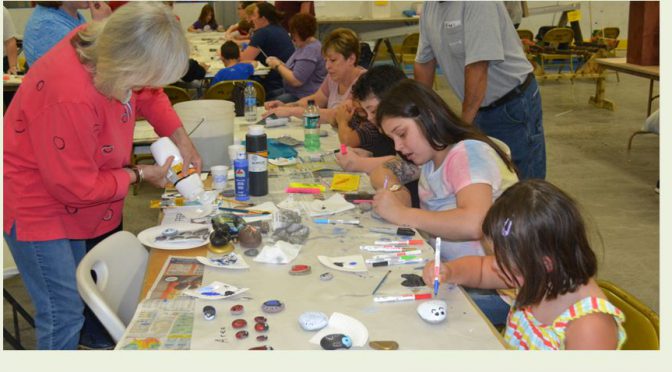 The new theme for June seemed to be painted rocks.  First, Wayne County Gem and Mineral Club member Donna Smith brought her artistic talents to GemFest and we added a new craft to the event.  Using rocks we had collected from various sites throughout the previous year, Donna set up between Linda Schmidtgall’s highly popular soapstone carving booth and Dave Millis’s gem tree/wire wrapping booth, creating a virtual trifecta of craft activities for youths and adults right in front of the club exhibits. 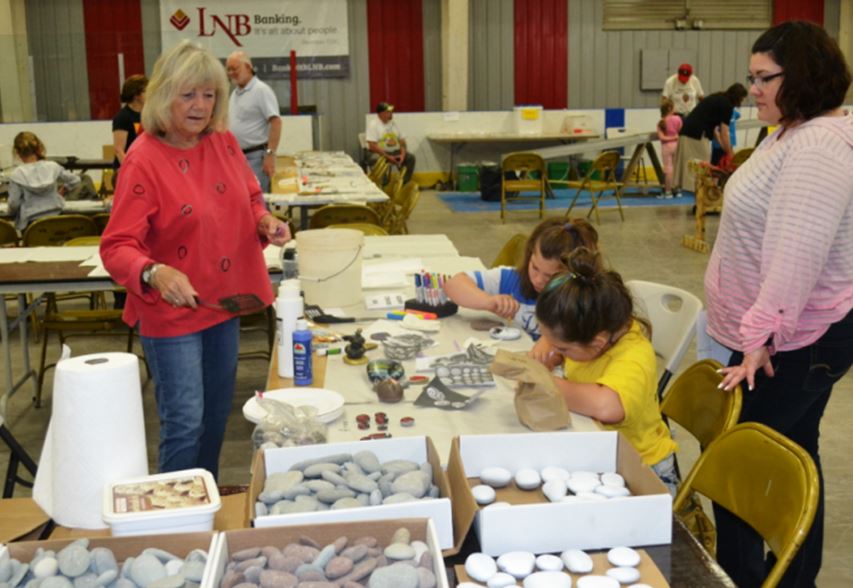 Donna (in red) watches two children paint their rocks. They selected their choice rocks from the boxes in the foreground. They were limited to two rocks each. We did not run out of rocks for visitors to paint, but we will need to find more for next year! Of course that won’t be very hard! Rock painting was clearly a successful addition to GEMFEST.

A bit later in June, a number of us spent time in Massachusetts and Vermont visiting 9 sites and collecting a diverse set of minerals and rocks.  You will likely read more on some of these sites in future newsletters and you will see specimens from some sites at the picnic in August.  But here I will report on an unusual find from the Chelmsford Lime Quarry.

While combing the dumps for actinolite, diopside, scapolite, and other minerals, Glenn Weiler spotted a light blue rock hidden in a crevice in the wall of the quarry.  No it was not kyanite.  In fact it was not even natural.  Instead it was a painted rock “hidden” there by a group called “Chelmsford MA Rocks”.  They had  inscripted one side of the rock with a message to take and/or rehide and a request that the finder consider acknowledging that you found the rock on their Group Facebook page.

Both sides of the rock we found “resting” in the Chelmsford Line Quarry in central Massachusetts. 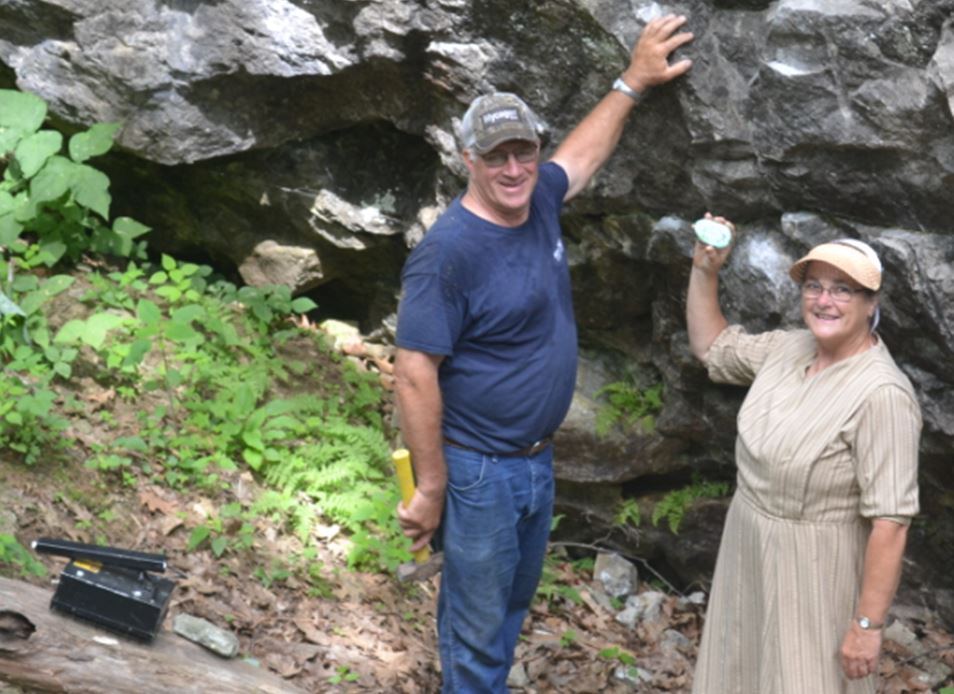 Glenn points to the crevice in the quarry wall where the painted stone Eva Jane is holding was found.

We bit on the idea and took the rock back to western New York and will “hide” it in some appropriate location.  No I will not disclose where.  In fact Glenn found the rock, so he took it and will select its next resting location.  Meanwhile, I set out to join their “little” Facebook group and tell them about our find.  In doing so I became the 1661st member of their “little” Facebook group and the artist who painted the stone responded almost immediately.  The club states that their mission is “to spread joy and brighten people’s day” via a “community-building activity designed to inspire creativity in all ages while energizing people to explore”.  There is no selling permitted and any messages on the rocks must be uplifting and “kid-friendly”.

This activity may upset a few purists among the ranks of mineral collectors or outdoor enthusiasts, but for anyone looking for creative ways to engage in “rock art” or for ideas to entertain and inspire children/grandchildren you might want to peruse some of the posts on this group’s public Facebook page. “Chelmsford MA Rocks”.