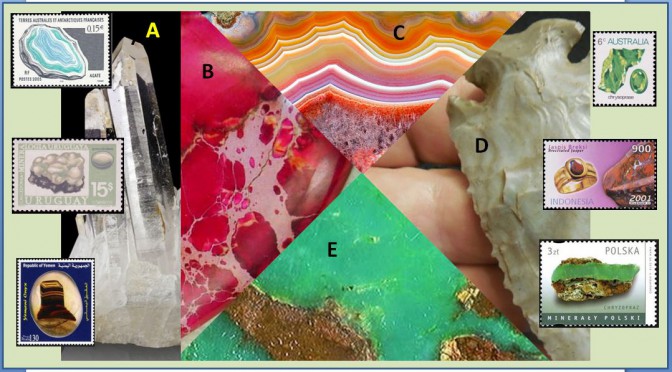 With cryptocrystalline quartz, we now have a multitude of terms, each with its own modifiers.  We have descriptors like agate, chalcedony, onyx, chert, flint, chrysoprase, and jasper.   And then there is opal?  So just what do all these different terms mean and why can’t we just have one word for this fine grained quartz that we love to collect and carve into cabochons?

Ideally, it could be said that we do have a single word.  The ideal name for all cryptocrystalline quartz is chalcedony.  Mindat.org (2014) states the definition simply:  “Chalcedony is a general term for all varieties of quartz that are made of submicroscopic crystals”.  Full stop, case closed.  But there are so many variations in color, texture, and origin that a number of additional terms have evolved.  When properly used, these terms can be very diagnostic.  They can tell us something about the origin of the stone, the nature of the host rock in which it grew, or the cause of the associated bright colors.  So when can we properly deploy some of these terms?

Chalcedony is the general term for cryptocrystalline quartz or silica and is probably the best term to use when you know little of a stone’s origin.  Chalcedony typically has a waxy luster and it may be translucent or semi-translucent.  Geologists often look for microfibrous texture before deploying the term chalcedony.  The name dates back nearly 2000 years, appearing in Pliny’s Naturalis Historia published in 77 A.D.  At that time, the term was applied to a translucent stone or rock common to the region around Chalcedon in Asia Minor (now Turkey). 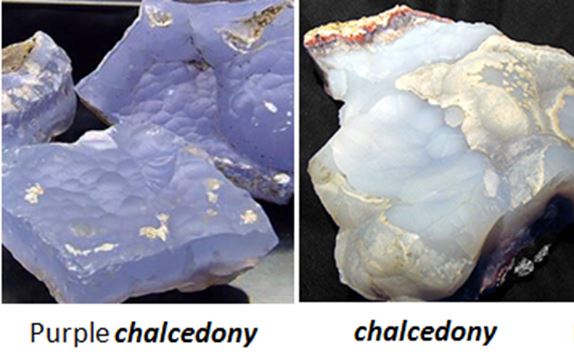 Agates are best characterized by their fineness of grain, intense color, and by color layering.  Although agates often grow as nodules within vugs in volcanic rocks, they can form in certain metamorphic rock    As agates grow in layers from the vug walls towards the middle, they can be hollow in the center or they can contain true macroscopic quartz in the center or between their multi-colored bands.  Volcanic rocks are more susceptible to weathering than the pure silica agates such that agates released by weathering and transported by water or by recent glaciations can be found long distances from their original source (i.e. along shorelines, in gravel beds, etc.).

Color and textural features in agates can be diagnostic of their location.  For example, the iron-rich deep red banding of Lake Superior agates reflect the composition of their billion year old host basaltic lava.  There are literally thousands of modifying terms used to describe agates and books have been written on the subject (i.e. Lynch, 2011).  Some names signify locations, like Lake Superior agate, Kentucky agate or Mexican Laguna agate.  Others carry modifiers that reflect a specific texture:  moss agate, lace agate, leopard agate, fire agate, and on and on.  Location and descriptive terms are useful because agates can occur with more variety in color and texture than probably any other stone or mineral.  Varying growth conditions and/or elemental impurities are to blame, although most of us hardly disapprove of Mother Nature for her work.

Onyx is a banded form of agate where the layering is distinctly parallel and much less chaotic than that associated with typical agate.  Commonly, the banding is black and white, but red onyx is also known to occur.  Dyed agates can often be very difficult to distinguish from natural onyx.    Interestingly, the term has been applied to various carbonate cave formations (ala. Mexican cave onyx), but strictly speaking this is a misuse of the term onyx.

Chert denotes a sedimentary origin.  It forms by replacement in nodules or concretions, typically in carbonate rocks when invaded by silica-rich fluids.  The Devonian Onondaga limestone of western New York is laced with dark gray to black chert.    Chert is also found in Precambrian sedimentary iron formations, often interlayered with iron oxides and it can be precipitated directly in deep marine settings.  Each carry their own diagnostic textures and in some cases, favorable lapidary properties. 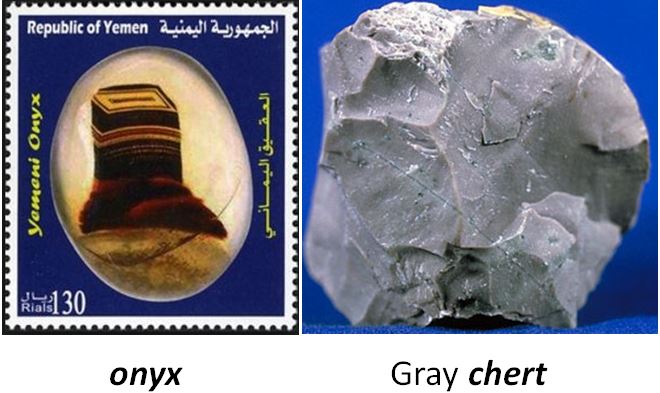 Flint is typically a term reserved for chalk or limestone hosted chert.   From a lapidary perspective it has come to be associated with higher quality material.  We all know of Ohio flint, which is recovered from nodules in both Devonian and Pennsylvanian Period limestones in central Ohio.   Flint often splits into flakes or sharp splinters, and this property has permitted its use in tools and weapons since the Stone Age.

Jasper is another term one often sees associated with cryptocrystalline quartz.  While there is not a clear and distinct definition, jasper is best used when the material is completely opaque.   Although often homogeneous and even-colored, textural variations found in some jaspers make them very popular as lapidary material.  Ocean jasper, poppy jasper, leopard jasper are all forms containing eye-like patches of color.  Sometimes these patches are almost glass-like in texture, other times they may even show macroscopic quartz crystals in their center. 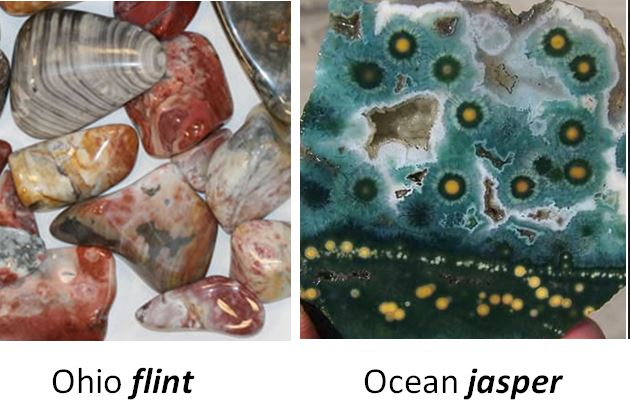 Chyrsoprase is a unique form of chalcedony where a minor amount of nickel imparts a bright green color.  It is formed during very low temperature metamorphism in dark volcanic rocks when silica released during metamorphism incorporates nickel derived from olivine into a silica-gel material that solidifies into cryptocrystalline quartz in fractures and sometimes vugs.

The list goes on, but the space here does not.  Opal is one of two October birthstones and will get reviewed then.  Some may list aventurine as a variety of quartz, but I will argue it is a rock with quartz as a dominant component.  Perhaps we’ll review that another time.   Glasses, like obsidian, are not crystalline and deserve separate attention also.

Just as one can devote a mineral club newsletter to quartz, one could easily devote an entire collection to the single mineral and never run dry of new and distinct material to acquire.